Manor Farm is a working family farm with crops and animals – its seven luxury cottages, once traditional farm buildings.

Sensitively converted to preserve their original character and appearance, they provide high-standard accommodation for families large and small.

Manor Farm is set in some of north Norfolk’s most attractive countryside, surrounded by green hills, woods and meadows. East Runton’s glorious beach, with its wide stretch of sand and rock pools, is just 15 minutes’ walk – or a quick drive – away. West Runton beach, right next door, is where a few years ago the fossil of a woolly mammoth was unearthed.

Visitors to East Runton have plenty to do. There are numerous cross-country walks, the beach, two pubs for a quiet pint, a village pond with ducks to feed, a children’s play area, shops and even a Greek restaurant. Nearby, Cromer and Sheringham have every kind of shop, restaurant and attraction imaginable, as well as their own wonderful beaches.

Towns, villages, beaches and attractions across North Norfolk are all within a short drive, with many on the doorstep. The choice for adults and children is enormous, as our North Norfolk page shows. 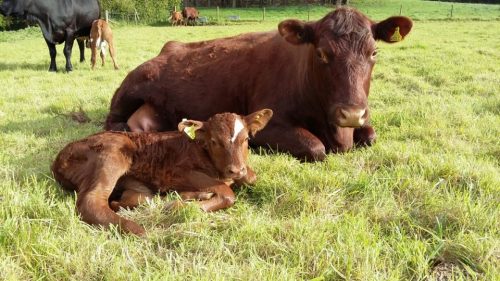 Work on the 150-acre farm never stops for the family. Crops grown are sugar beet and malting barley, while the rest is down to grazing. Animals include 110 mule ewes, which have been crossed with a Texel ram to produce meaty lambs. Twenty Red Poll breeding cows and their calves.  A Simmental bull, Hocus Pocus.   Gerbil the Shetland pony, plus donkeys – Jess, Dora and Donald. Pygmy goats – Maizie, Daisy, Lottie, Ludo and Uno.  Not forgetting Claude and Cecily the very fluffy farm cats and plenty of ducks and chickens.

A little history – from the family

Manor Farm was bought in 1919 by the current owners’ grandfather, after he had endured – and miraculously survived – four years in the trenches as an Officer on the Western Front.

Originally from London, after the war he found he just wanted a quiet, peaceful life. He had a small dairy herd and did a milk round in the village. In 1930, he introduced the family to tourism, accepting the first campers on a very informal basis. In the early 1960s, his daughter and son-in-law took over running the farm. They phased out the cows and introduced breeding sows and laying hens.

At about this time the farm’s camping business became more ‘serious’ and organised, with the introduction of ‘thunderboxes’ – rather primitive loos! In 1975, after two purpose-built blocks with flushing toilets and showers were built, the campsite really began to expand.

The current generation – Gill, Fiona, Tom and Phil – have continued the business although moving away from pigs and hens to sheep and cattle.  As a result the farm buildings became redundant and rather than letting them fall into disrepair converted them into the lovely cottages that they are today!

"We hardly used the car, the walk into Cromer (in particular) is easy and can be done along the beach depending on the tide; or do the circular walk to West Runton and return via the cliff top or beach (again, tide dependent). We’ve spent most of the last 20 years coming to Norfolk (at least twice a year), so it’s safe to say we’ll be back!"

- The Robinsons (Leicestershire) and Rowley the Pug
"Ideal location to family in both Cromer and Sheringham. Super comfortable accommodation and the barns are just so lovely, warm and welcoming.

The grandchildren love feeding and seeing the animals and we’ve had some lovely days on the beach, Wizard Maze and the Horse Shire Centre. They were all great value for money!"
- Sue from London
"Our third stay at Manor Farm and a third different cottage - we love them all! So well furnished, equipped - and the dog loved the underfloor heating!"
- The Robinsons (Leicestershire) and Rowley the Pug
"Our second visit to Manor Farm and it won’t be my last! Lovely! Lovely! Lovely!"
– Sue from London
"Thank you for a lovely stay in your cottage. Home from home, everything you need for a self-catering holiday."
– John and Joyce Clasper
"Our second trip to the farm as a gang, our 7th as a family. An amazing stay at beautiful Manor Farm. The barns are perfect for our ever-growing group, the little ones and dogs absolutely adore it here.

Already excited to book our next trip! Thank you as always for having us."
- The Parsons family, Senior family, Blundell family and the whole gang
"Our short break has been blessed with sunny blue skies every day, so we have made the most of being outdoors, walking and enjoying the sea and coastline.

As always the cottage has not disappointed, comfy, warm and well looked after. Sorry to be going home, but we will be back again. Thank you for helping our break to be so enjoyable."
- Andrew and Mauda Cauvier, Derby
"Thank you for a lovely stay, the cottage is beautiful, and our family enjoyed the peace!"
- Ibrahim & Hayes family
"Our fourth visit to Manor Farm and second time in The Old Pigsty. Nice chilled out week, plenty of walks on the beach with the dog and walks to and from Cromer.

Cottage is fab as always, we love the farm, the village and the county! We’ll be back! Make sure to use the village butcher – he’s well worth a visit!"
- Carla, Steve, Eleanor and Rowley pug
"Just splendid, such a gift thank you. Beautifully looked after, warm and cosy – makes for a wonderfully relaxed family holiday.

We have been struck by the generosity and hospitality of the owners who (to be honest), have gone far beyond the call of duty to make us feel at home and welcomed us. We will always be grateful."
- The Theos
"Thank you for a wonderful stay, we went on lots of walks and the weather has been great. The ‘Cow Byre’ is lovely with lots of special touches. Thank you for making our stay so comfortable, we’ve had a fantastic time.

Thank you and you’ll definitely see us again."
– Chris & Mick Collick, Dadley, Dale, Derbyshire
"This is our third stay at Manor Farm and we have loved every single minute. So lucky with the weather again, beach walks every day and not had to use the car. The cottage has everything we have needed for our stay and it is going to be a struggle to go home.

Thank you for a lovely stay"
- The Arnold Family
"Well, we have just about stayed in all of your fabulous cottages!!

Stayed with all the family this time, for a big birthday celebration! The barn is converted beautifully, it’s well equipped and very comfortable and cosy."
- The Redferns and Mathers
"Another lovely day at Manor Farm cottages. This was a family holiday Granny, Grandad, big children and grandchildren and of course the dogs, Mabel and Oscar. A lovely time for everyone, love the cottages."
– The Browns, Atlerstone, Warwickshire
"Fab time here with friends. Lovely cottage, it’s clean, comfortable and well equipped. Thank you, it was great to be able to bring our four legged friends."
– The Angelouis and Longdens